The recent Wrath of the Druids DLC has brought in some new content for AC Valhalla. From fighting enemies to Eivor’s decisions being put under the test with new choice missions, the new DLC has it all. One such decision making mission is the Northern Reach Quest in which Eivor decides the fate of cousin Barid’s peace talks.

The Northern Reach mission starts immediately after the Into the Fog Quest in Lough Glendallon. Although the mission mainly comprises of completing a set task given by Flann, the dialogue choice appearing towards the start of the mission is where most players are stuck at.

Which is the best choice for the mission? Let’s find out.

The Northern Reach mission prompts Eivor to reach Cashelore and talk to Flann for the mission. After a short choice based dialogue, Eivor needs to head to Cashelore’s pigeon coop and gather three royal demands to finish the mission.

The choice based dialogue involving Eivor’s cousin Barid is where you need to pay attention, as the decision might influence the mission’s story. Let’s see all the choices before you can make the best choice possible.

2. All the Barid Choices and Consequences

Eivor can decide between a total of three choices in the Northern Reach mission in AC Valhalla.

i. Barid is Right

This option allows Eivor to agree with cousin Barid regarding his decision to initiate the peace talks on behalf of Flann.

Consequences: Agreeing to this choice makes Barid happy that his cousin has his back. But Flann will still make Eivor visit the Northern Ui Niell and make things go according to his own plan.

READ:  This Son of Jorvik Quest: Does Halfdan Know the Truth? – AC Valhalla

This option allows Eivor to disagree with Barid’s proposal and agree to Flann’s own plan.

Consequences: Agreeing to this dialogue makes Barid a little upset by his cousin’s decision. The rest of the mission goes exactly the same way as the previous one.

This option is where Eivor does not give any opinions regarding the dialogue choice. Instead of relying on Eivor to make a decision, Eivor wants Flann and Barid to settle the discussion themselves.

Consequences: Agreeing to this dialogue also has no consequences. Choosing this will just stop Eivor’s further dialogue exchanges with Barid and Flann before Flann orders Eivor to go and collect the royal demands.

All in all, none of the choices have any consequences to Eivor’s story progression in the Wrath of the Druids DLC. You can choose any of the options since whichever you choose the outcome of the choice will just be Flann making the final decision regardless.

But if you still want the best option. You can refer to this.

3. Best Choice Between Barid is Right, Barid is Wrong or Don’t Ask Me?

The best choice for the Barid Option in the Northern Reach mission is the “Barid is Right” option. Choosing this option has no consequences and also helps Eivor maintain a strong bond with cousin Barid.

Although, none of the options have any real consequences and the mission will play out the same way regardless of the option you choose, but the “Barid is Right” is the perfect choice for you if you’re aiming for a kind Eivor who is good to his friends and family.

“Barid is Right” seemed like the perfect option in my opinion since I wanted Eivor to be as close to cousin Barid as he was to his brother Sigurd. Choosing this option not only left Barid feeling like his family was by his side but also created a strong bond between the cousins.

Whether you choose the best option or not is completely up to you. Just remember, if you want to experiment with each dialogue session of AC Valhalla’s new Wrath of the Druids DLC then the SAVE button is always there when you need it! 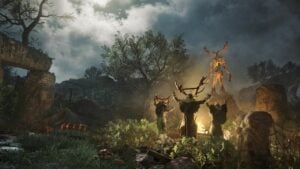