Female antagonists are a force to be reckoned with when it comes to video games. These “She-Villains,” with their striking appearance and overwhelming powers, were always praised by gamers and fans alike. Adding to that list is one of the female antagonists of the newly released Resident Evil Village, i.e., Lady Dimitrescu.

Dubbed as the Tall Lady by the RE fans, Lady Dimitrescu became a sensation immediately after the release of Resident Evil Village’s very first trailer focused on Castle Dimitrescu. Some fans were mesmerized by Lady Dimitrescu’s beauty, while others were awestruck by her commanding stature.

But like most fans, you’re probably wondering how this vampire lady and her three daughters stumbled upon the village and associated with Mother Miranda. Here’s all you need to know about Lady Dimitrescu and her past.

1. Who is the Tall Lady in Resident Evil Village?

The tall lady, a.k.a Lady Dimitrescu featured in Resident Evil Village, is the first antagonist Ethan comes across at the start of the game. Trying to find the whereabouts of his kidnapped daughter Rosemary, Ethan Winters stumbles upon Castle Dimitrescu only to find the tall vampire lady Dimitrescu and her three daughters inhabiting the place.

Did you know? According to the devs of Capcom, Lady Dimitrescu is about 9’6” (2.9 m) tall, making her nickname “tall lady” even more valid.

I. What is the Tall Lady’s Full Name?

Tall Lady a.k.a Lady Dimitrescu’s full name is actually Alcina Dimitrescu. According to some old documents and notes found by Ethan throughout Castle Dimitrescu, her existence dates back to around 1958 when she first came across Mother Miranda.

The name Dimitrescu comes from Romania and parts of Transylvania. The developers of the game were somewhat inspired by Bram Stoker’s Dracula and created Dimitrescu and her three daughters based on the female characters from the book.

Tall Lady indeed has a sinister role in the game. She is an evil character who obeys the order of Mother Miranda and is hostile towards Ethan Winters on every encounter. Being a vampire, Alcina Dimitrescu is certainly out for Ethan’s blood. But her rage is soon tripled when Ethan, throughout the progression of the game, kills off her daughters one by one. The boss fight with Alcina reveals her true form.

As much as we like Lady Dimitrescu, it’s a shame that her character gets killed at the early stages of the game. Since she is the first boss Ethan encounters, her story ends when Ethan is done with Castle Dimitrescu.

This fact alone makes me wish that there were more information regarding the Dimitrescu family line and Alcina’s past other than what the game has already revealed.

By the end of Resident Evil Village, we fans already knew that the monsters and other creatures of the cursed village were the creations of Mother Miranda’s twisted experiments with the Megamycete mold. This was also the origin of Lady Dimitrescu’s vampire powers. Back in 1958, Alcina joined the Cadou virus cult and became Mother Miranda’s test subject for experimentations.

In a note found by Ethan in the game, it is revealed that the mold gave her a thirst for blood and flesh, and she became an undead being at the age of 44. The mold had even morphed her into a giant being giving her that fearful height.

READ:  E3 2021: Resident Evil Village DLC Confirmed to Be in the Works

Being of noble birth, Alcina had inherited the Castle Dimitrescu and decided to live the rest of her immortal life amongst the Castle walls, under the control of the Cadou parasite and Mother Miranda’s order.

Seeing Mother Miranda’s love and struggle to bring her daughter back to life, Alcina Dimitrescu decided to have children of her own before convincing Mother Miranda to do more experiments for new children.

But being an immortal being, we know Lady Dimitrescu’s chances of conceiving a child are slim to none, right? So, where did her three daughters come from? Let’s find out.

3. Lady Dimitrescu and Her Daughters

Lady Dimitrescu and her three daughters were responsible for making Ethan’s venture into the Castle a living hell under Mother Miranda’s orders. These three girls: Bela, Daniela, and Cassandra, were the creation of Mother Miranda’s experimentations with the mold.

Mother Miranda and Alcina Dimitrescu created three insect swarms like creatures and gave them three human bodies to absorb and turn into the three vampire girls we know now. Lady Dimitrescu decided to adopt all three girls giving them her Dimitrescu name.

These three girls shared the same powers of lust for blood as Dimitrescu, except they were vulnerable to the cold. That is why Ethan could freeze the girls with cold and kill them off. Bela, Daniela, and Cassandra were loyal and obeyed their mother. The Dimitrescu girls only fed on workers and servants working in the Castle before Mother Miranda ordered to kill anyone and everyone to revive Rosemary.

After Ethan killed all three daughters, Alcina hunted Ethan down more actively in a fit of rage. Which could mean that she cared about her daughters, even though they were technically not her offsprings.

All in all, I think we can all agree that the inclusion of Lady Dimitrescu was indeed a smart move for the Resident Evil series. Here’s hoping we see a sequel of her terror or even a short back story soon. 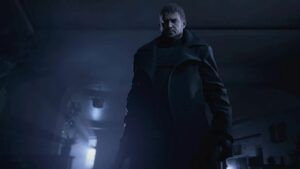 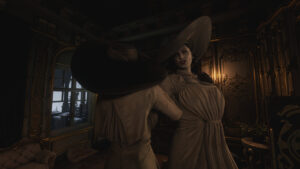