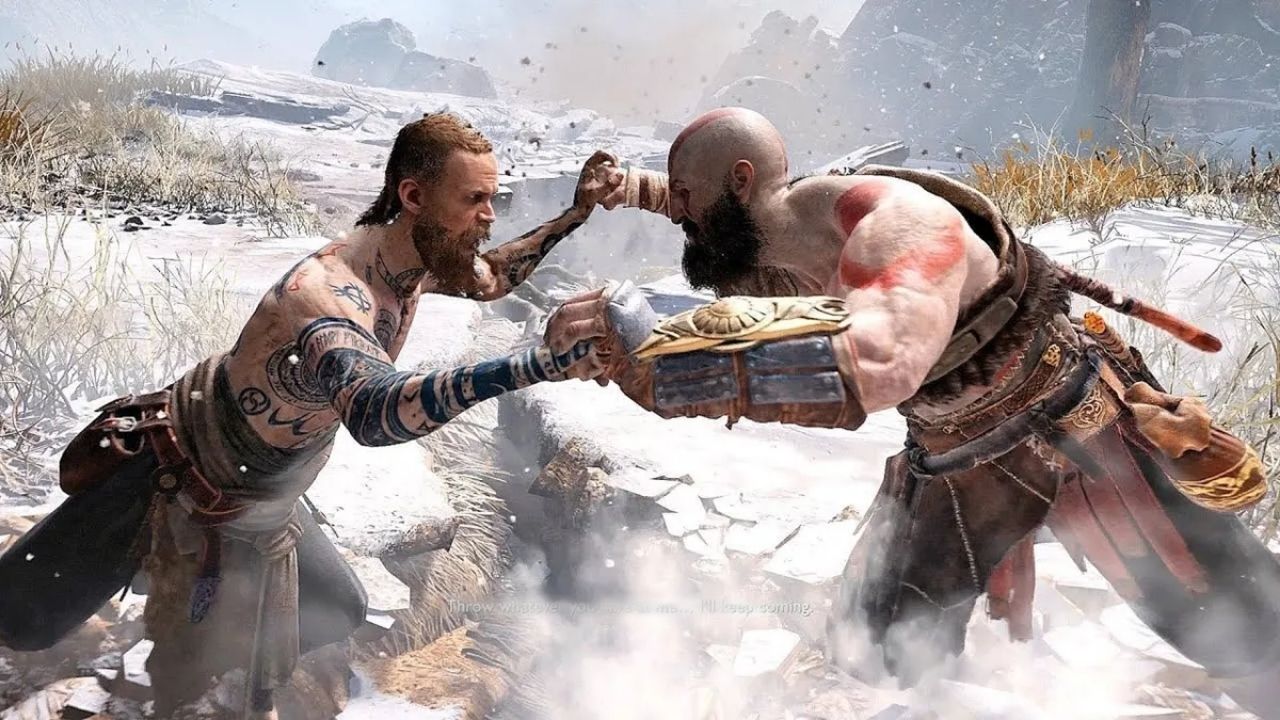 God of War is riddled with subtle nods and references to the older games that hit players with tons of joy and nostalgia. One of the best such moments come right in the middle of the game when Kratos and Atreus enter the mountain.

Upon entering the place, the duo encounters a beaten-to-near-death Modi, with whom we fought some time ago. He explains how Thor, his father, had nearly destroyed him after learning how he ran away from Kratos and Atreus.

Atreus, who’d been growing more and more arrogant since finding out about his godhood, proceeds to threaten Modi, telling him to back off. It somewhat makes sense, with how, in their last fight together with Magni, Modi kept talking trash about his mother.

As Kratos asks Atreus to stay his blade, he ignores his father and kills Modi straight away, saying how gods can do whatever they want.

Even though Kratos explains to Atreus how they shouldn’t kill for indulgence, Atreus continues to brush him off. This leads to Kratos angrily yelling how “There are consequences to kill a god!”

However, even after saying that, Atreus still yells back at him, asking how he’s so sure of that. To some of us older God of War players, this moment is a direct nod to Kratos’ past and the things he brought upon Olympus.

But, let me explain the meaning behind Kratos’ weighty weights to the new players of this series or to those that have only played the soft-reboot.

Before God of War(2018), Kratos was a vengeful demigod who killed the Greek gods after constant betrayals and misuse of his abilities. Doing so brought ruin and destruction to his realm, obliterating it – a direct consequence of his actions. That is why he tried to stop Atreus from killing Modi.

Would killing Modi, or by extension, any Norse god carry severe consequences with it, though? Could it really be the same as, say, killing Poseidon and sinking everything beneath the water? Well, let’s find out, shall we?

What were the consequences of killing a god in God of War before?

Now, this is a bit of a complicated one, but I’ll do my best to explain it to you in as simple a manner as I possibly can.

So, if you’ve been following God of War for some time now or have just heard about its protagonist, you probably know that Kratos has a knack for killing gods.

While his actions in the past may have been morally ambiguous, nobody can blame him after he had everything taken from him time and again by the Greek gods. But did his past actions have any consequences?

Well, if you count how Greece is basically non-existent and ruined now by the time God of War (2018) happens, courtesy of Kratos, then yes, his past actions had severe consequences.

Whether it be killing Poseidon and sinking everything underwater, destroying Hermes and spreading too many mosquitos across the lands, or anything else for the matter – the fact remains that committing deicide can completely change a realm, all for the worse.

So, considering that and Kratos’ history of doing that exact thing repeatedly throughout his life, you finally get to understand the weight behind his words to Atreus.

But, here’s a head-scratcher for you – does the same thing apply to Norse mythology and its gods? Let me explain.

What happens if you kill a god in God of War now?

You’ve probably seen how the world gets completely covered in snow in God of War: Ragnarök’s trailers, rights? Do you think that’s just the winter landscape of Midgard? Well, no.

It’s actually Fimbulwinter, a prophesied long winter that happens in the wake of Baldur’s death and is a sign that Ragnarök soon approaches. So, you see the connection here? Killing Baldur is what caused winters in Midgard.

You need to keep in mind, though, that Baldur is a pure god and not a demigod, unlike Magni and Modi. In the past, Kratos obliterated Hercules, which did not do anything to the world.

So, if that carries any weight, then killing a demigod does not matter – only a pure god’s death could bring about calamities.

But that begs the question – why did Kratos, then, tried to stop Atreus from killing Modi? The answer is simple – Kratos understands that doing so would leave you with nothing but rage and, eventually, regret. He simply doesn’t want his son to go down the same path as he did, to any extent.

Father of the year right there, everybody.