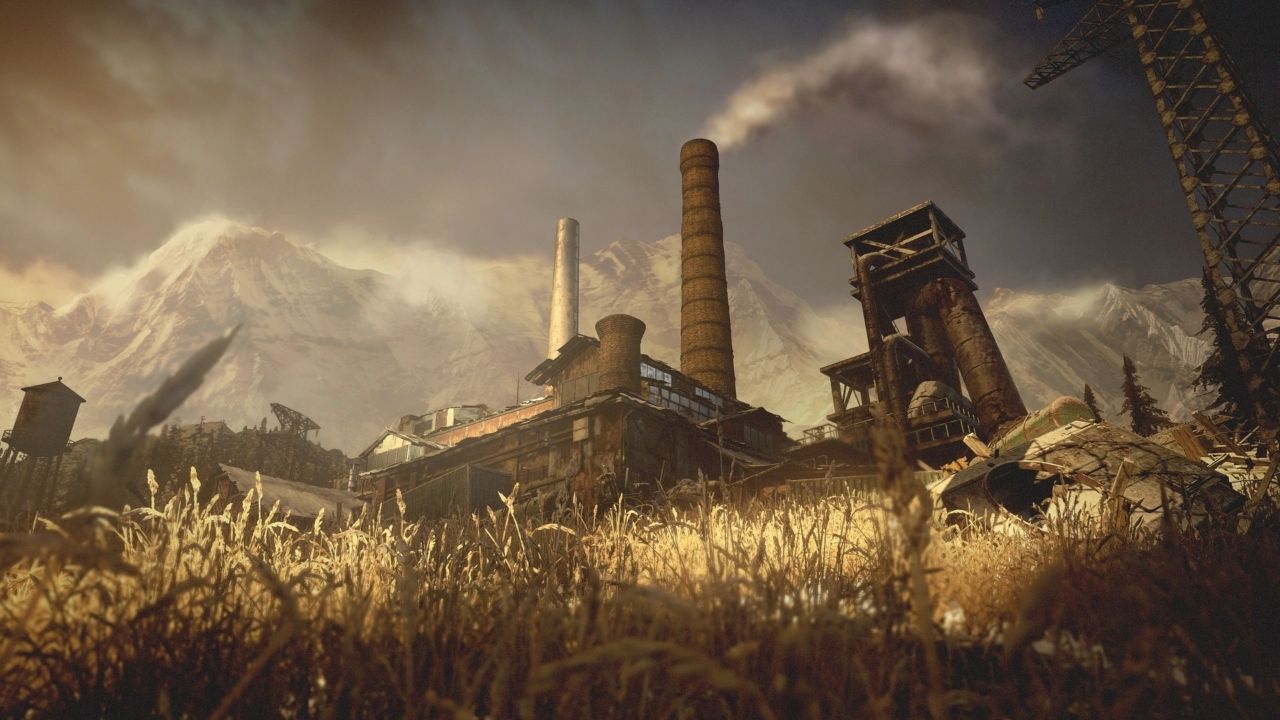 After surviving at the ruins north of the village and collecting all four flasks, Resident Evil Village still has a few surprises left in store for Ethan Winters.

You will be called up to Heisenberg’s mysterious factory, and you’ll need every bit of arsenal in your inventory to get through. Follow this guide to make it past the Heisenberg’s Factory in Resident Evil Village.

To reach the factory, begin by slotting all four flasks into the altar that you’ll find just next to the Duke.

Follow the flames to the Stone Dias and use the Giant’s Chalice. A pedestal will lower, revealing the new bridge. You’ll also get a save point on the right. Then proceed towards Heisenberg’s Factory.

Enter through the factory through the barn door, inside the large gate would be locked. Head left and grab the gunpowder and also find a door that will take you underground. Follow the path, grab the Chem Fluid off the table and examine the wall covered by the cloth.

Just as you take a glimpse of the plan on the wall, you will encounter Heisenberg, who’ll fill you in on the plan. Even though you are not psyched about the place, you have no other choice than to go deeper into the factory.

Now you need to run away into the hallway through the opening until you find a dead end. Look on your right and jump into the chute to reach Level B4.

You’ll land on a large scrap pile; as you make your way through the pile, look and collect the rusted scrap, gunpowder, and metal scraps. Find the ladder along the wall to climb up, and some Haulers will attack you. They are like ghouls but have head armor to protect them.

Move on through the gate at the end and up the ladder; when you exit the vent, you’ll see that Duke has already set up in the elevator. The Duke will feature two new weapons, the V61 Custom Handgun and SYG-12 Shotgun.

Use the flight of stairs to reach into the next area with the open door. Here you’ll find a relief Mold. Just as you pick it up, the Soldat will come to life. Keep your distance and shoot its reactor, which will kill it quickly.

Get back to the Foundry and insert the Relief Mold into the slot to create a Relief of a Horse. Take this and insert it into the door to unlock it.

Go down towards Heisenberg’s Quarter, but we can’t access it yet as we don’t have the key. Take the ladder down instead and reach the Engine Room. Shoot the orbs and stop the machine.

Fight some ghouls, and when reaching the end, climb up using the ladder and crawl through the grate. Move through the Hallway and use the gate that leads back to the foundry. In the next room, you’ll encounter the backup generator, but it’s missing a cog.

Go up the stairs at the end to find another locked door. You need to shoot the orbs at the top and the bottom to find the factory Map of the lower levels and the Cog Mold. You can also find Development Note 1 File on a table.

Now the Soldats you encountered on your way here have awakened. Take care of them and create the Large Cog to insert into the Backup Generator. The earlier path will be blocked, but a new one will now open. Take care of other Soldats before moving on. While you go up the stairs, you will fight another Soldat before you can unlock the door.

Proceed to the next room to find 3 Haulers and a small room at the back. If you shoot the inactive Soldat, it will break through; kill it to get 12000 Lei and Magnum Ammo. When you go upstairs, you’ll face an even tougher variant of the Soldat with two drill arms. Its weal point is on its back.

Unlock the next door to get to the Lift Controls; now, with the Electricity, you can return to the door of the Operating Room that needed power past the Foundry. There will be a Soldat that will attack you; kill it. Listen to the recording and get the M1851 Wolfsbane – Long Barrel, and go back to the lift.

You can activate the controls to go to the other side and proceed to the next room, fight another Soldat with two drills here. Unlock the door, and you will find that Sturm will come after you again, Run away down the hall to pull the lever and bring the elevator containing Duke to B3.

Use a nearby ladder to go up; you will spot some Moroaicas near a drill. Go through the small opening at the end.  You need to drop down, break a wall and enter the Grinder Shaft. Once you go up, you will be attacked by two Soldats, but they will be flying; take them out by shooting their reactors.

Destroy the three red orbs to stop the grinder to take the ladder up the shaft. Go up the stairs you find and look on your right; you’ll find Chem Fluid and Development Note 2 File and the Upper Levels Factory Map on a crate nearby. If you check the map now, there is a hidden chamber nearby. Move the minecart out of the way to crawl into the hidden space.

You will find the Ball Mold, which will help you access the Labyrinth Puzzle, but as you move out into the ventilation hall, you will be sucked in fast, so shoot down the middle red orb to stop it.

Pass through to where the fan was and make your way down around the shaft till the ladder. Climb up and then take the elevator to B1.

Move down the hall, and in the next room, you will find the Key Mold against the Wall. Climb the ladder and use the lever to bring Duke’s Elevator Up. We need to go to the Foundry at B4. The lights will be out, also look for the Soldat. Create the Iron Horse Ball and Heisenberg’s Key using the new Molds.

When you return to the elevator, you will face a new enemy, the Soldat Panzer, which is fully covered in armor. To get to its reactor, you need to destroy its armor using explosive rounds or magnum shots. After destroying the panzer, take the elevator up to B1 and use your new key.

2. How to Defeat the Sturm Mini-Boss

The Sturm will again charge at you breaking through the walls, but this time will get stuck. Use this to your advantage and go around to shoot using your magnum into your Jet Turbine. He will explode to leave you a Complex Mechanical Heart.

After destroying the Sturm, follow and drop down into the cargo bay2. You’ll find a ladder, climb and move down to the end of the lift. You’ll reach back at the place of the entrance, but as you try to go outside, you will be tossed back down by Heisenberg. Time to fight.

Pull off the nearby grate to crawl through into the heap. Hop into the tank and use the elevator to reach your fight ground. Blast off the door and go outside to face Heisenberg.

3. How to Beat Heisenberg, The Main Factory Boss in RE: Village

The key to fighting Heisenberg is to aim for the weak orange spots with the Gatling gun. Use the cannon to guard when he rushes you.

Do enough of this and Heisenberg will pick you up, continue aiming for his head. After you lose the tank, use your own arsenal to continue hitting for the head. Just be sure to avoid his attacks as they are deadly. Once he goes down, you will get the Crystal Heisenberg.

Find the Mechanical Part (Cylinder) in the B4 level of the factory. There is a breakable wall with yellow paint; destroy it and claim your prize.

This file is located in the same room from where you collect the Cog Mold.

The second file is in the hallway after you visit the Grinder Shaft. Just enter the room, and the file will be on the table.

In the factory, just after the cutscene on the B5 level, after you meet Chris, the computer will be on the table.

The diary is in the control room before the Cargo Bay, located on top of the table.

After you stop the big ventilation fan, go to the opposite side and locate the goat on the ledge.

The eighteenth goat is on the railing outside when you are going from B1 to B3 in the elevator; take care of this one as it is easy to miss.

The final goat of Heisenberg’s Factory is just before the cargo bay. You need to crawl into an adjacent room to find it on top of a table.