God of War Ragnarok features Kratos and Atreus, who embark on an epic journey in hopes to prevent the battle of Ragnarok, an all-out war between the Giants and the Aesir gods that destroys all nine realms, as the prophecy says.

Kratos and Atreus make their grand return in the most anticipated game of the year and sequel to the blockbuster God of War (2018). Kratos sports his Leviathan Axe as well as the Blades of Chaos from the first game. While Atreus’ role was being a sidekick in the first game, players are wondering about his role in God of War Ragnarok.

How long do you play as Atreus in God of War Ragnarok?

There are plenty of opportunities to play as Atreus in God of War Ragnarok. During the story, players will head out on various missions from the perspective of Atreus. Once those sections are over, the game automatically switches back to Kratos as the protagonist.

However, the game does provide players with the opportunity of exploring and completing side content as Atreus. If you do like playing with Atreus, then it’s suggested make the most of the time he’s available as a playable character.

How do you play as Kratos again?

Once the sections featuring the perspective of Atreus is over, the game automatically switches back to Kratos as the main playable character of the game. Players cannot switch between Kratos and Atreus as and when they like, since the game doesn’t allow that.

Players need not worry about Kratos not being a playable character again, as Atreus is only playable for a limited period of time. The game automatically switches to Kratos after that limit. However, Atreus can be controlled as a sidekick while playing Kratos.

Can you play as Atreus later in God of War Ragnarok?

Unfortunately, Atreus as a playable character is limited throughout the game. He is only playable during different sections of the story and is limited to the extent of that. Outside of select campaign missions, Atreus is not playable, unlike Kratos, who is playable at all times.

But that’s not to say that future God of War games won’t feature him as a playable character. He could very well be a whole different character that you get to play with, similar to Kratos. One can only hope that we get to spend more time with Atreus in the future.

What are Atreus’ abilities in God of War Ragnarok?

Atreus’ skillset and playstyle is wildly different from his father, Kratos. It is unique and vastly unfamiliar when compared to Kratos’ playstyle. His bow can be used to fire different types of arrows, and his regular melee attacks have the ability to block incoming attacks as well.

Just like Kratos, he has his own Rage attacks that allow him to transform into a wolf once the Rage meter is full. However, in general, he’s more on the ranged side, as his main weapon is his bow while Kratos is more on the melee side with Leviathan Axe and the Blades of Chaos. 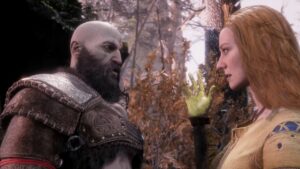 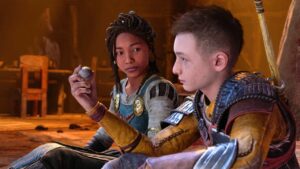