New World Weapon Guide: How to Get the Nothingness Void Gauntlet

Nothingness is a Legendary Void Gauntlet that gamers desire to get their hands on in New World. The 600 Gear Score Weapon packs a punch with massive damage while also healing injured teammates.

To craft Nothingness in New World, the character needs to have 200 Arcana skill and a Tier 5 Arcana Repository. You also need the following materials:

However, many of these ingredients are difficult to acquire. In other words, it hinders you from getting one of the best weapons in the game. In this guide, learn how to get the materials required to craft Nothingness in New World.

1. How to get Death Quintessence in New World?

To craft Death Quintessence in New World, players need to have 3 Death Essences. You can gain this essence with 4 Death Wisps, which in turn requires 5 Death Motes.

Those looking for Death Motes can find them at Blightroot, Blightcrag, and Blightmoth. Motes can also be obtained in Alchemy Crates from zone levels of 0 -18.

Unfortunately, a location to find Death Quintessence in New World is still unknown. Therefore, the only way to get this item is by crafting or purchasing it from Trading Posts.

2. How to get Runic Leather in New World?

Moreover, the character must have Level 200 Leatherworking skills and a Tier 5 Tannery to gain the ability to craft this item.

There isn’t any specific location to find these Tier 5 epic resources, so players have to stick with crafting. Otherwise, purchase it from other players who have the Runic Leather through trading.

3. How to get Runestone in New World?

The Runestone, required to craft Nothingness in New World, is a Tier 5 Epic Resource. In other words, the only way to get this stone by yourself is by collecting the required materials and crafting it.

4. How to Get Void Crystal Core in New World

Gamers can obtain the Void Crystal Core from drops after killing Humanoid Creatures hiding in Level 45 Zones of New World.

This legendary material will require the players to grind in high-level dungeons. Fortunately, the Nothingness Void Gauntlet requires only one Void Crystal Core, meaning the character can escape the area quickly after attaining the item.

5. How to get Eternal Ice in New World?

Eternal Ice is a legendary item dropped by Level 58+ enemies. To farm them, go to expeditions and prioritize killing opponents like Dynasty Heavies.

Although the drop rates are lower, you can take a trip to the Shattered Mountain and defeat enemies in hopes of acquiring an Eternal Ice for the Nothingness Void Gauntlet.

6. How to get Wildwood in New World?

Players can get Wildwood in New World by harvesting them from Ironwood Trees. There are plenty of spots for New World gamers to find these types of trees to cut down.

I recommend going to the Valor Hold near Edengrove, where players will find plenty of Ironwood trees to cut down. It will give players enough Wildwood required to craft the Nothingness Void Gauntlet.

7. How to get Blisterweave in New World?

The Blisterweave is a Tier 5 Cloth in New World. Players can find drops of the item after harvesting Wirefiber or by breaking Supply Crates.

Regular spots to find Wirefiber are the routes around the Brightwood Fort and the north of Edengrove. The legendary item has a low rate of drops, but you need a couple to make the Nothingness Void Gauntlet.

8. How to level up Arcana Skill to 200 quickly in New World?

To level up the Arcana Skill to 200 quickly in New World, players need to continuously construct items at the Arcana Repository. For this, players must have a bunch of crafting materials to craft potions and other items.

However, some items can’t be crafted at a lower-tier repository. If you need to craft weapons or potions that require a higher-tier Arcana repository, travel to another settlement where you might find one.

The best way to find a Tier 5 repository is to find a guild where there are various max-level arcanists. If you want your settlement to have a high-level repository, find more skilled potion-makers and recruit them into your guild.

Those that are looking to craft the Nothingness Void Gauntlet need to max out their Arcana skill, which will take a significant amount of time. Therefore, choose items that require the ingredients you already have for maximum efficiency.

That sums up all the materials you need to make Nothingness in New World. However, it’s also essential to have your Arcana skill to the max level. To do this, keep crafting potions and other magical items.

After that, players can get their hand on the Gauntlet, which is a great secondary weapon to enhance the attacks of primary weapons. There are plenty of other buffs to add to the Gauntlet as well, so choose what fits you the best and start dominating on the battlefield. 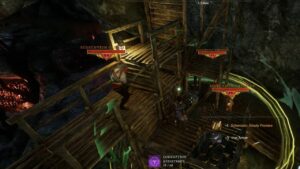