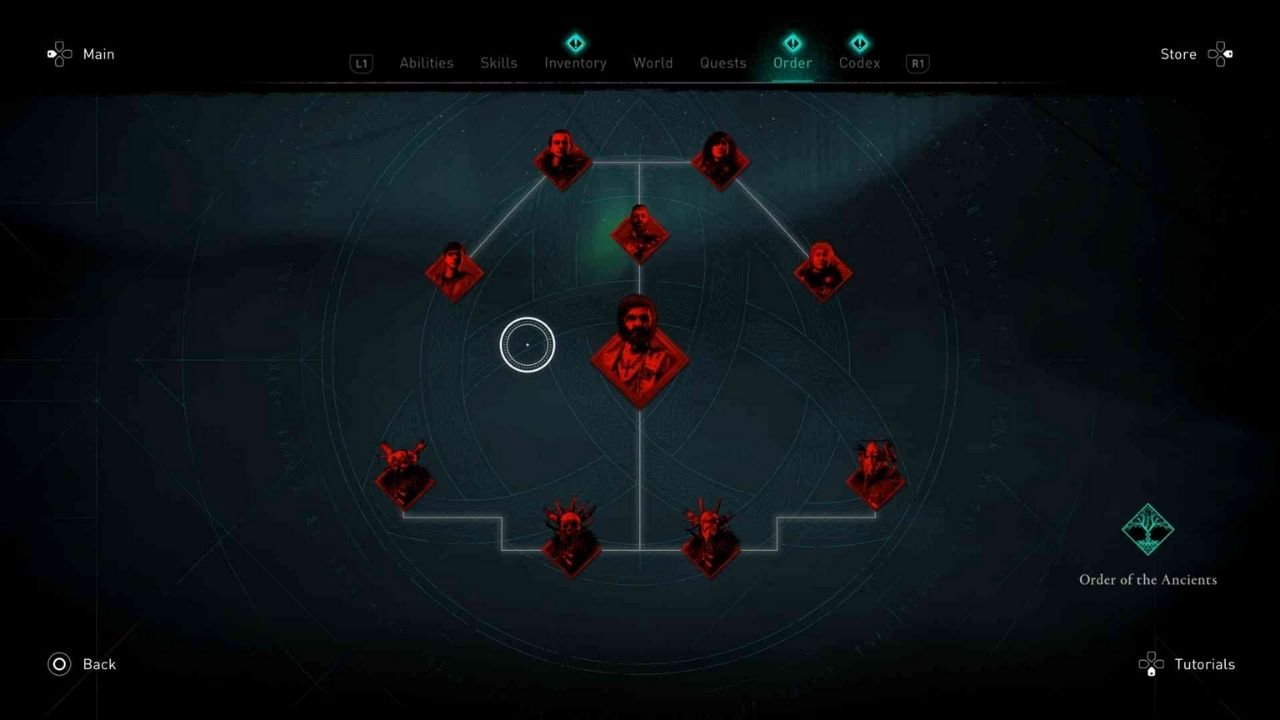 When dealing with many enemies, Eivor’s fight is never over in Assassin’s Creed Valhalla. Now, with the Wrath of the Druids DLC released, new threats are lurking around the corner. These threats, a.k.a, the Children of Danu, are members of a secret cult trying to stop King Flann’s plan of Ireland’s unification.

To put these cultists to a stop, Eivor has to eliminate every single one of them immediately after setting foot in Ireland. If you’re also on the lookout for these Children of Danu members and have difficulty figuring out their whereabouts, then look no further. Here’s how you can find and kill those members.

How Many Children of Danu are there in AC Valhalla?

There are a total of 10 Children of Danu in AC Valhalla’s Wrath of the Druids DLC. While six of the members can be killed anytime, the rest of the four members can only be killed during their specific quests.

Now let me tell you all about these Children of Danu members and their locations.

How to Find and Kill All Children of Danu in AC Valhalla?

The Wren, a.k.a, Niamh, the poet, can only be killed during the Potion of Blood quest in AC Valhalla. Her death will start the other Children of Danu member hunt.

Niamh’s identity and location are unlocked after collecting three clues related to her. The first clue is given automatically at the start of the Potion of Blood quest, whereas the second clue can be found inside an abandoned hut on the northern side of Port Auley. The third clue can be found in front of a ritual located in the center of Lough Gara.

Niamh’s current location will be revealed in the Children of Danu menu with all the clues collected.

The Wren can be found walking along with the marketplace of the Rathcroghan town in Connacht.

A sneaky assassination can kill The Wren, or you can face her head on and kill her.

The Cursed, a.k.a, Sétnae, druid of the mists, is the second Children of Danu member Eivor needs to eliminate. The Cursed can be killed in the Into the Fog mission.

Sétnae’s identity and location are revealed after collecting four clues related to her. The first clue is unlocked automatically after killing the Wren, and the second is unlocked after completing the Potion of Blood quest.

The Cursed can be found inside a cottage in Tuam as a part of AC Valhalla’s Into the Fog mission.

Eivor needs to face off in a deadly battle against the Cursed to kill them. There will be lots of minions there to fight you, so it is better you put your focus of the target instead of attacking all the minions.

The Deer, a.k.a, Ruaidri, he of the ports, is the third Children of Danu member Eivor needs to eliminate in AC Valhalla. The Deer needs to be eliminated to get The Seed’s location clue.

The first clue regarding The Deer is automatically unlocked after the death of The Cursed. The second clue can be found in the Armdel Trade Post in the north-eastern part of Ulster.

The Deer can be found in Inch Lough Neagh, in the eastern part of Ulster.

Ruaidri will be standing at a campsite with lots of enemies backing him up. It would be best if you eliminated all of them.

The Seed, a.k.a, Beec mac Nath-i, he of the oceans, is the following Children of Danu on Eivor’s hit list. He is the main target of The Wages of War quest.

The first clue regarding him has unlocked automatically at the start of The Wages of War mission. The second clue can be found inside the Church of Ulster’s Movilla Abbey. The third clue is automatically unlocked after The Deer is eliminated.

The Seed can be found in the northeast region of Ulster called Dunseverick Fortress.

The Seed will be inside the Fortress surrounded by many enemies you need to fight first.

The Oak, a.k.a, Eogan mac Cartaigh, can only be killed during A Scourging of Snakes quest. The Oak is also revealed as the Children of Danu’s Leader and the Bishop of Ireland. The mission will occur near the end of the Wrath of the Druids DLC’s storyline, so you should finish the Ireland story first before attempting to kill off the other Children of Danu members.

The first clue for The Oak automatically unlocks after The Cursed’s death, and the second one opens after defeating The Seed.

The Oak can be found inside the Church of Armagh while trying to complete A Scouring of Snakes quest.

The Oak will be confronted by King Flann and Eivor will then get a chance to eliminate him. Instead of wasting your time fighting Eogan’s two guards, try to attack Eogan to finish the quest faster.

The Spider, a.k.a, Aideen, merchant of Dublin, is a Children of Danu member that Eivor can eliminate after defeating The Deer. She is not related to any quest and can be executed at any point in time.

The first clue for The Spider’s location is unlocked after defeating The Deer. The second clue can be collected after winning a drinking contest against Dublin’s Drinking Champion. (You can bid the lowest amount of silver for this challenge.)

Just a tip– Make sure you do a manual save before attempting the challenge, as it can take several tries.

The third clue can be found at Skald’s Rest in Dublin.

The Spider can be found making deals at Dublin’s marketplace.

The Spider can be confronted and killed quickly, or you can also perform a sneaky assassination.

The Ash, a.k.a, Cummascach, the High Druid, can be executed after defeating The Wren. As The Ash is not part of any quest, it is better to hold off on killing this Children of Danu member before you complete Ireland’s entire main story.

The first clue regarding The Ash is unlocked immediately after defeating The Wren. The second clue can be found between lakes Lough Tuam and Lough Rea near a ritual site in Connacht. The third clue can be seen in Kiltober on the south side of Connacht.

The Ash will be inside the cave near Kesh Corann in Connacht. He will be about 75 meters away from the cave’s entrance.

After Eivor reaches his location inside the deep cave, he can be confronted and trounced.

The Whisper, a.k.a, Leasleach, madwoman of the bogs, is the subsequent Children of Danu member that can be defeated after The Spider’s death. His location is revealed after collecting three clues.

The Whisper can be found roaming around the bogs in the middle of Meath. She is always wandering around the location and constantly moving, so it is a bit harder to locate her exact positions. Just try to camp out in the bogs and wait till she appears.

The Whisper can be easily defeated in a battle against Eivor and attacked using melee weapons.

The Blaze, a.k.a, Conlae, he of the flames, can be targeted after the defeat of The Ash. His location is revealed after collecting three clues nearby.

The first clue regarding Conlae unlocks immediately after the defeat of The Ash. The second clue can be found near a waterfall in Bally na Gall, east of Armagh, Ulster. The third clue can be found inside a burned house in Ulster’s Clogher region, north of Black Pig’s Dyke.

The Blaze can be found roaming around the burnt cottages to the north of Black Pig’s Dyke.

The Blaze will be walking along the road with his Irish Wolfhound, which can attack Eivor when it senses danger. So, be careful while approaching this Children of Danu member. Try to get rid of the dog first before attacking the target.

The Mist, a.k.a, Trian, he of the stone circles, is the target after defeating The Blaze. There are a total of three clues that point out The Mist’s location.

The first clue unlocks after defeating The Blaze. The second clue can be found near a rock in Ulster’s Doon Dover, and the third and final clue can be seen inside a boat at the beach in Aileach.

The Mist can be found on the small island called Doon Fort near Ulster.

The Mist can easily be defeated in a death battle. You just have to focus on attacking the target and not any other minions.

Each Children of Danu will drop an Amber Shard upon death which can be collected and returned to Deirdre. If you collect all 10 Amber Shards, Deirdre will summon the final boss near Asfinn. If you manage to defeat the boss, you will be rewarded with the Mythical Gae Bolg Spear. 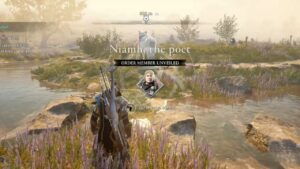 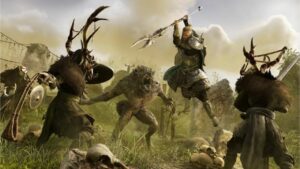 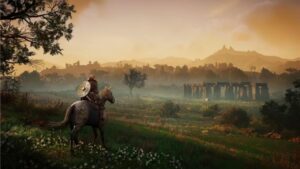 AC Valhalla Taking Root Guide: How to Collect The Root Of Mountain?