With a whopping power level of 160, the Essexe area in the AC Valhalla map is filled with formidable enemies to compete with and mysteries to discover. One of these mysteries is the daunting Gleewoman World Event found in Essexe. You might have also come across this world event and encountered Aswig, the woman you’re meant to rescue. Aswig is an aspiring poet trying to find inspiration for her words, and who’s better to inspire than the mighty Viking leader Eivor?

Now, here’s where every player has been having issues. People have been unable to complete this mission, but they have also been unable to stop Aswig from following them everywhere. That’s right! That woman is stuck to Eivor like gum unless you finish the mission. So, if you don’t want Aswig to follow you to Valhalla, you might want to try out these tips on how to complete the quest.

Aswig is part of the Essexe World Event and can be found in the Wulfaswic area of Essexe. Eivor will have to untie her and set her free.

The Gleewoman world event will start once Eivor frees Aswig from her bonds. Aswig will then follow Eivor around and write a poem. After that, all players need to do is kill some boars and enemies nearby the area.

After a few kills, Aswig will have another round of dialogues with Eivor and ask for some money. Players need to pay the total amount of 165 silver coins to end the mission successfully.

Once you’ve completed the mission, you can opt for any other Essexe mystery scattered around on the map.

3. How to Make Aswig Go Away in the Gleewoman World Event in AC Valhalla?

To make Aswig stop following you around and go away, you need to kill a few boars or enemies with her. You can also try parkouring a bit throughout the ruins till Aswig gets her poem inspiration.

Once you’ve successfully inspired her, she will ask for a bit of money. So instead of cheap-skating your way out of giving money, you must give the total amount of 165 silver coins to make her leave.

I. Is Aswig Bugged?

No, Aswig is not bugged. However, to stop her from following you around, you to complete the mission and offer her the entire amount of money. Otherwise, she might not accept the offer and still follow regardless.

With Aswig finally off of your back, you can now go roam around freely without having to worry about a particular shadow following your every move. 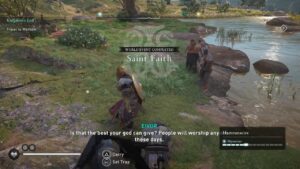 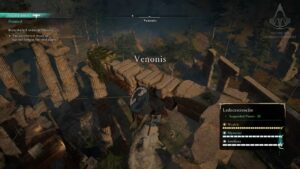