One of the biggest charms that has drawn loads of gamers to Valheim is its vast open world map. The map is so impressive that different parts of it are divided into areas called “biomes”. These biomes have different land, habitat, monsters, and animals. But I’m sure all these different biomes have made you overwhelmed as to which one you should visit first.

Don’t worry, I’ve covered everything and ranked the biomes from easiest to hardest difficulty, including the items, craftables, bosses, animals and monsters. So, be sure to take notes to be the best Viking of Valheim.

Although, I should mention that there are three more biomes: Mistlands, Deep North, and Ashlands. But since the game is still in early access at the moment, these biomes are still in development. You can however, visit the Mistlands, but there are no animals, monsters or loot yet.

Now, let’s get on to ranking the biomes and let me tell you all about them.

The Meadows Biome is the one players spawn in. It is a mixture of grasslands and forest. It has Beech, Birch, and Oak trees throughout the whole area. Players can usually make starting base there before progressing further. (The Meadows Biome is connected to the dense Black Forest Biome as well).

iv. Boss and How to Defeat It

You need to block its attack using a shield if using melee weapons or dodge the attack if using bows and arrows.

READ:  Tips to be the Best Archer in Valheim – Guide to Crafting a Better Bow

The Black Forest is unlocked after players defeat the first boss Eikthyr. Not only does the Black Forest have an abundance of resources including Pine and Fir trees, but it is also filled with monsters.

Both copper ore and tin ore can be smelted in the smelter to make copper and iron bars which can be forged into bronze bar.

The 2nd boss of Valheim is The Elder found in the Black Forest. The Elder’s location is upon visiting the Burial Chambers and it has to be summoned by gifting 3 ancient seeds to the alter (Greydwarf Brutes and Shamans usually drop the seeds).

If you’re trying to take down The Elder, make sure to have plenty of fire arrows and activate Eikthyr’s powers to reduce stamina wastage. Also, having some bronze armor can make you take less damage from its attacks.

Do note, in order to reach the swamp biome, you do need a raft or a boat. So, make sure to have one ready before venturing out.

Be sure to clear out the monsters in that area and only summon the Bonemass during the day. Also, remember to dodge his initial attacks and attack it using Iron melee weapons to defeat the boss easily.

READ:  Valheim Bonemass Guide – How to Defeat It, the Location and Rewards

Upon defeating the boss, it will drop a Wishbone allowing the players to find out hidden scrap iron or buried chests.

The Mountain Biome is the snow covered area in Valheim. The area is forever frozen and players will be affected by the cold.

It is recommended you make a frost resistance mead, and a lox or wolf fur cape to negate the freezing effect.

The 4th Boss of Valheim is the Moder found in the snomy mountain biome. It’s a big dragon-like creature that can be summoned by offering 3 Dragon Eggs.

Ranged attack work best while she is on the ground. You can use fire arrows, poison arrows or obsidian arrows and inflict damage overtime.

The Plains Biome is a wide grassland in Valheim. Despite its peaceful appearance, the plains biome is filled with deadly creatures and has the last and the most difficult to beat boss of the game.

i. Items  to Find

The final boss in Valheim is Yagluth, a skeleton like creature that does not have any legs. Yagluth can be summoned by offering 5 Fuling totem to its alter.

Dodge Yagluth’s meteor attack by hiding behind the rock pillars. Frost arrows are the best items to defeat Yagluth.

The ocean biome surrounds the land areas in Valheim and is only accessible via a boat. It does not have a boss but does have a hostile monster known as the sea serpent.

READ:  Valheim Leviathan: A Guide on How to Farm and Use Chitin – Weapons & More

And that’s all you need to know about the different biomes in Valheim. You may begin your quest now. 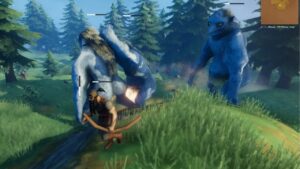