Assassin’s Creed Valhalla has so far done a bang-up job of bringing realms of the Old Norse to life. Two of the game’s five currently active regions include two of Norse mythology’s most popular realms – Asgard and Jotunheim – with the rest being more familiar territories namely England, Norway, and (erstwhile) Vinland.

With expansions that’ll take the game’s titular character Eivor to Ireland and Paris on the way, a data mine of the game has revealed that Muspelheim, the Norse realm of fire, may be coming to AC Valhalla as well.

In Norse lore, Muspelheim is home to the fire giants and is guarded by Surtr and his flaming sword. Dataminer ‘j0nathan’, who is a reliable presence in the AC Valhalla community, took to Twitter to provide screenshots of his recent dive into the game’s code and as you can see in one of the screenshots below, a line of text clearly reads “DLC_Muspelheim”.

Muspelheim has made plenty of appearances in modern culture with the most memorable pop-ups being in Marvel’s Thor Ragnarok and Sony’s smash hit God of War. However, both iterations of the realm differ tonally: Marvel uses Muspelheim as the setting for a thrilling yet comedic action sequence, while God of War presents it as an opportunity for players to earn advanced gear through the ‘Trials of Muspelheim’ and also fight the realm’s resident Valkyrie, Gondul. Both of these are highly intense encounters.

Nothing is known yet of what Ubisoft’s iteration of Muspelheim will bring, if it does in fact come out. But players would be wise to expect a substantial challenge; any event in a scalding hot land of flames is not going to be a walk in the park.

The werewolves will be accompanied by a whole lot of new items as was revealed in another recent data mine. To read more about that, just go over to the button below and click.

A Data Mine Has Revealed New Items Coming in AC Valhalla’s New DLC
Get Assassin’s Creed Valhalla on: 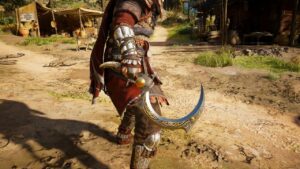