NVIDIA and AMD’s rivalry is going strong, and with Intel about to enter the market, the GPU race is going to become even more competitive. AMD is rumored to reveal three more high-end RDNA 2 RX graphics cards, and Intel will finally be releasing their much-talked-about range this summer. So, NVIDIA may need to pull out the big guns to ensure it stays ahead of the game.

Their RTX 3090 Ti is set to launch very soon, and it seems people will have to make some space for it in their systems.

Some leaked photos over on Videocardz show the NVIDIA RTX 3090 Ti is looking like quite the beefy beast of a graphics card. Many iterations for different partners show that it will feature a huge heatsink, be physically thicker, and consume a lot of power.

For example, the FTW3 model from EVGA will feature a 3.5 slot design, different from the 2.75 slot from its predecessor. The card will also require a 16-pin power connector, and RVGA used a new PCB to accommodate this.

Some rumors allege that the NVIDIA RTX 4090 could require as much as 600W, proving to be an issue for many users. The RTX 3090 Ti is looking to be the final piece of hardware from the Ampere range before the next generation hits the market.

AMD has also announced its RDNA 3 technology, and NVIDIA is rumored to have five RTX 40-series SKUs ready for the market. The next generation of GPU technology is only a few months away, and NVIDIA is looking to launch the Ada Lovelace range in September.

Even though the shortage is ongoing, graphics card prices continue to drop, but they are still well above MSRP. With Intel entering the market and giving stiff competition to NVIDIA and AMD, there is hope the market will look much better with the start of the new generation. 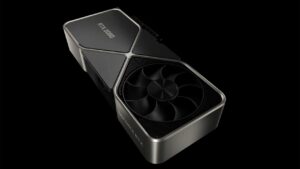