Hoard maps are artifact collectibles and clues that players can use to find hidden unique items like tattoos or cosmetic schemes for their longships in Assassin’s Creed Valhalla. Every territory in the game has at least one hoard map containing an image or a clue hinting at the hoard’s location.

Suthsexe, one of the late-game territories with a suggested power level of 160, has four (4) treasure hoards to collect, but first, their maps must be located. The four maps are:

1. Where is the Suthsexe hoard map in AC Valhalla?

Suthsexe hoard map sits on top of a table inside a cottage labeled Monk’s Lair in the northwest Suthsexe, north of the synchronization point.

Head into the cottage and pick up the map. There are no tricks to it, and you also don’t need to solve any puzzles to get it!

The map reads, “In the northern and western corner of Suthsexe, under the oldest tree in Chertsey Abbey, lies my glory-wealth. A memorial stone is split, as lightning struck this hoard once it was buried there to illuminate it in God’s light.”

The hoard for this clue is very close to this location.

2. How to find the Suthsexe hoard in AC Valhalla?

Suthsexe hoard is located in the southern cemetery of Chertsey Abbey Ruins just northeast of Monk’s Lair in the northwest Suthsexe.

Head for the cemetery next to the lake in Chertsey Abbey Ruins, and you will notice a giant tree next to the gravestones. The hoard is buried right under this huge tree, loot it, and you will receive a Cross Face Scheme (Face) tattoo.

The Crawleah Warehouse in the southern part of the city is a distrust area loaded with several enemies, so it is better to take a sneakier approach.

Approach the location from the southeast and enter the straw/mud hut closest to you. You will find the Suthsexe Crawelie hoard map on top of a table inside. Go ahead and pick it up.

The map contains a sketch of an island surrounded by streams.

Walk around and rummage on the tiny red flowerbeds grown in the middle of the pond, and you will find the Crawelie hoard that is  Huginn Call Scheme (Back) tattoo.

5. Where is the Suthsexe witch’s house hoard map?

Break the wooden panel at the back of the witch’s house and throw a torch in it to burn out the poisonous green gas.

Slide into the house from the small crawlspace and pick up the hoard map from the shelf on the right. Don’t stay for long inside, or you will be affected by the poisonous gas.

The map contains a caricature of a man holding two sticks with a cross under his left arm, marking the hoard’s location.

6. How to find the Suthsexe witch’s house treasure hoard?

Suthsexe witch’s house hoard is located under the left armpit of the human caricature illustrated south of the Croindene city in northeast Suthsexe.

Navigate on your map and find the caricature illustrated on it just south of Croindene city. Head to the location, and see the exact figure engraved on the ground. Loot the hoard from under the left armpit of the illustration. The hoard reward is Huginn Call Scheme (Front) tattoo.

7. Where is the Suthsexe treehouse shoppe hoard map?

Suthsexe treehouse shoppe hoard map can be obtained from the shoe bought from the child at the Treehouse Shop, west of Kingley Hideout in southwest Suthsexe.

Head to the location and climb up the treehouse to reach the shop. Speak to the Anglo-Saxon child selling random items and select the first dialogue, “The Shoe,” to buy it from him for 25 coins. You will receive the treasure hoard map along with the shoe.

8. How to find the Suthsexe treehouse shoppe hoard?

Suthsexe treehouse shoppe hoard can be found underwater after jumping from the cliff southwest of Brimcliff Monastery, just south of the Treehouse Shop in southwest Suthsexe.

Head south from the treehouse shop and go west from the Brimcliff Monastery. Keep walking down until you reach the end of the land and a cliff where you will see a wooden cross.

Using the cross as a reference, jump down into the water and swim around to find the hoard underwater next to a shipwreck. The treasure hoard is Skull Post Scheme. 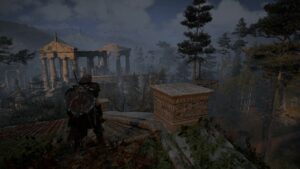 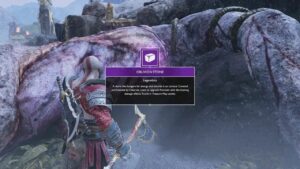