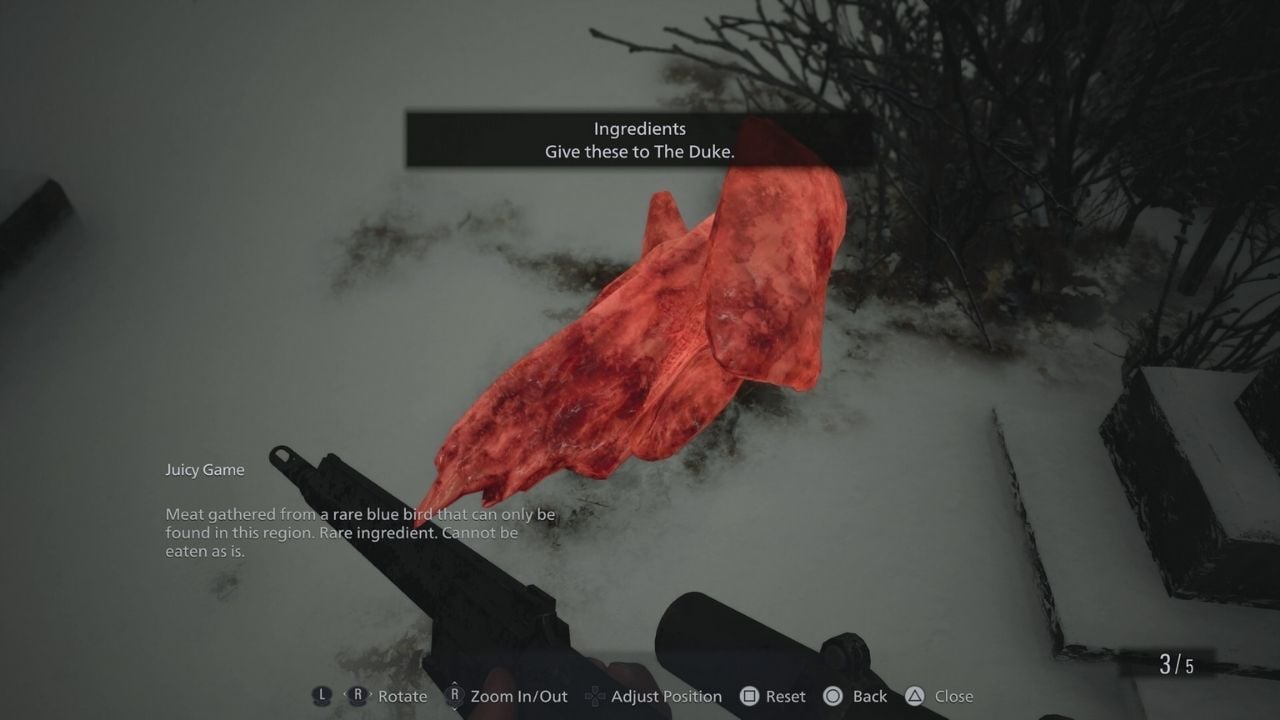 Resident Evil Village has added quite a few new things to RE fans’ tables. Not only has the storyline taken a different turn, but there have also been some additions to the collectibles and health part of the game. One such addition is the Duke’s Kitchen which requires players to collect all types of animal meat, including the elusive juicy game so that Duke can cook up some good food for Ethan.

Juicy Game is the meat collected from a rare blue bird found in the snowy Resident Evil Village. But, this alleged rare bird is hard to kill and even harder to locate, so if you’re struggling with finding its whereabouts, then have a read before you venture into the village again.

1. Where to Find Juicy Game in Resident Evil Village?

The Juicy Game meat can be found by harvesting the blue bird, found perched on a tall tree branch right in the middle of the village next to the graveyard.

Just try to find the main door to Castle Dimitrescu, and you will be able to find the bird sitting on a tree branch next to that door. Also, do remember, the bird only appears after you’ve successfully defeated Dimitrescu.

A clue regarding the blue bird’s exact location can be found in the garden of House Beneviento. You will have to shoot the bird to collect its meat.

Now, collect the juicy game meat and deliver it to Duke for a delicious recipe.

Juicy Game meat can be used for the Tochitura de Pui recipe, which gives an increased permanent health buff.

The ingredients for the Tochitura de Pui include:

The Juicy Game can also be sold in Duke’s shop for 7200 Lei. But, it’s better to keep it for the recipe since you can have many more high-priced collectibles in the game.

3. Types of Meat to Collect in Resident Evil Village

Besides the rare, Juicy Game meat, many other animals in Resident Evil Village can also be harvested. They are:

With these food items collected, go and enjoy some of Duke’s delicacies and divulge in each buff.