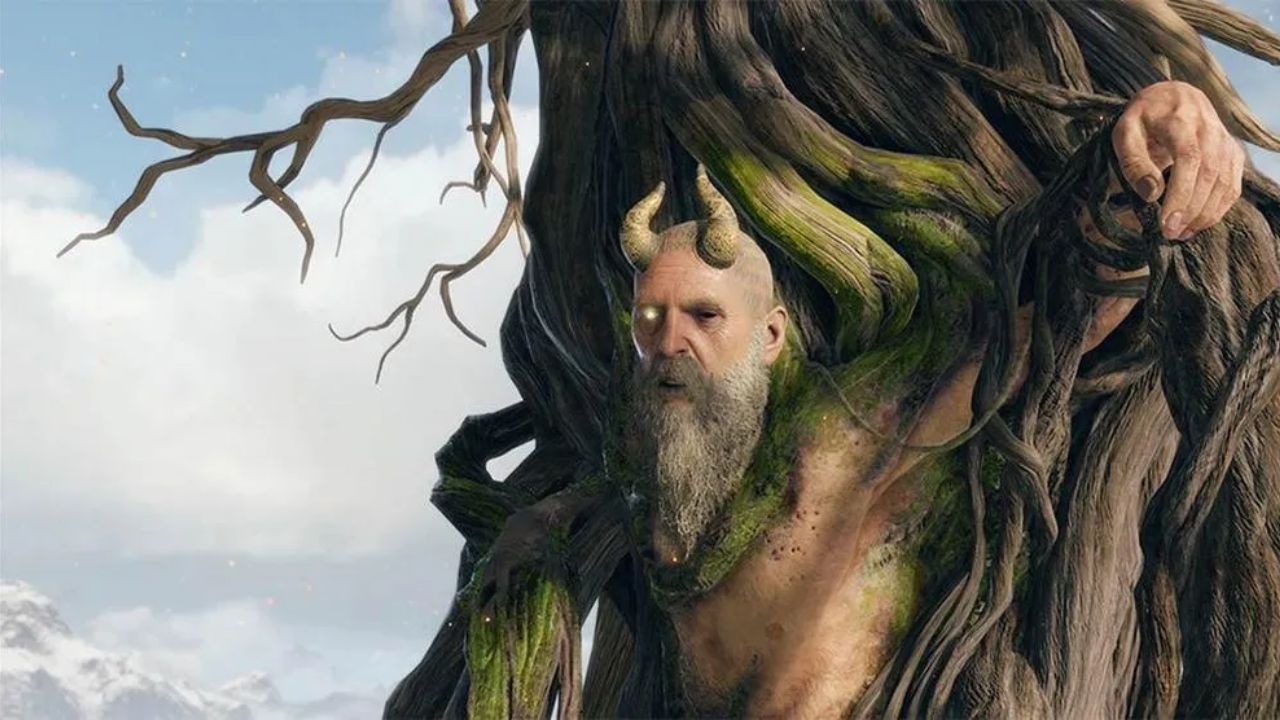 Mimir, “the smartest man alive,” is the Norse God of Knowledge and Wisdom. In God of War 2018, he is also the tritagonist who aids Kratos and his son, Atreus, in their adventurous journey to the tallest peak in all nine realms. Mimir is introduced to the players when Kratos and Atreus reach the highest mountain peak in Midgard and find him entrapped in the trunk of an indestructible tree.

Mimir appears to be a feeble old man with one glowing/bejeweled eye. He tells them that he has been imprisoned there for 109 winters by the vicious Allfather Odin, who tortures him every day. He requests Kratos to free him from the imprisonment in exchange for guiding them to the highest peak in all nine realms which is in Jötunheim – the land of the giants.

Contents
Why was Mimir imprisoned by Odin in God of War?
Mimir and Norse Mythology
About God of War(2018)

Why was Mimir imprisoned by Odin in God of War?

Odin suspected that Mimir aided the Jötnars (giants), his enemies, to retreat from Midgard and destroy all the mystical gates leading to Jötunheim, so he imprisoned Mimir at the tallest peak in Midgard.

During the gameplay, players can hear various “tales of Mimir,” which paint a decent picture of the ongoing events and Mimir’s background.

Mimir tells players that he befriended Jötnars just like Tyr, and the Jötnars gifted him with Bifröst crystals in his eyes, giving them the glowing appearance. The Bifröst crystal allows people to travel among the realms, and with Bifröst eyes, the traveling became more convenient for Mimir.

Unfortunately, when Tyr helped the Jötnars to escape the wrath and butchery of Thor, Mimir was captured by Odin because of his friendly nature towards the giants and Bifröst eyes. Odin imprisoned him in the indestructible tree and gouged out one of his Bifröst eyes to ensure he could not escape or travel to another realm.

After 109 winters, Kratos and Atreus found Mimir, chopped his head off, and revived him using Freya’s Vanir magic, liberating him from his long imprisonment.

READ:  Do I Need to Play Any Other God of War Games Before Playing the God of War PC?

The actual Norse mythology and Mimir’s story in God of War 2018 are extensively different in nature, and it should not be considered an accurate representation of the myths.

In Norse mythology, Mimir is the maternal uncle of Odin. He was sent as a hostage by the Aesir to the Vanir gods during the Aesir-Vanir War. The Vanir gods beheaded him and sent his head back to Odin.

Odin revived the head of Mimir through his Aesir magic, after which he carried him around, and Mimir recited secret knowledge to him. There is also no mention of Mimir possessing Bifröst eyes in the mythologies.