Playing Assassin’s Creed Valhalla and looking to hunt down all of the legendary animals? As a Viking raider in older England, there is a lot on your plate in terms of things to do.

When you are done with pillaging the neared encampment of Saxons and want to use your skills to hunt some game, then what is better than the ultra-rare Legendary animals in Assassin’s Creed Valhalla? Just construct the Hunter’s Hunt in your settlement and follow this guide to seek out these majestic beasts.

To find the Elk of Bloody peaks, you’ll need to travel to Norway under a waterfall. Be sure to use your ‘Brush with Death’ skill combined with poison resistance.

2. Bear of the Blue Water

The bear will also be in Norway, but this time on a little ice cap on the outskirts. This is going to be a tough one as the Polar Bear is big and deadly. I would recommend you dodge the attacks instead of parrying them as it is tough to get the timing right, and missing the parry can be very fatal.

No, it’s not a group of Zombies but three wolves you’ll find in the west of Earnningstone, in Oxenefordscire. Now you’ll have to take three of them simultaneously, so be ready for a lot of dodging; combine this with poison attacks, and you’ll be golden.

Travel to Northeast of Aelfgarstun in some ruins, and you’ll find Gemad Wulf, a quick beast. I would recommend you go in with quick single-handed weapons and try to land many as possible in quick successions before retreating.

In the ancient ruins just Northeast of Colcestre, you will locate Black Shulk while it devours a corpse. Aim your bow to find the three weak points of Black Shulk; shoot these fast to get in three stun attacks.

You’ll find the Battle Cattle just south of Lunden; these are a horde of bulls in a pen. The way to go here is just like the Corpse Feeders using poison Damage to take on multiple foes.

7. Beast of the Hills

Among the Uriconium Ruins, East of Quatford, you’ll need to slip through some caves into a walled arena to find a bear in a dungeon; that’s your target. Just dodge instead of parry and slow down time while going in for an attack.

Find the pig in the Bleasby Swamp, Northeast of Repton. Beware, when you arrive, the pig will charge right at you. The trick here is that the Blood Swine will try to hide and charge from the tall grass in the swamp, so keep your eyes over the tall grass and look out for dirt that flies when the pig charges at you.

9. Wildcats of the Weald

To locate these two Lynxes, travel to the Dark Weald, southwest of Wincestre. There is a young one and an older one. Start with the young as it’s going to be quite easy to defeat it.

Lynxes like to lunge at you, so the best thing is to dodge at the last moment.

This moose is found in Vinland, North of Tionontate:Ken. The blood-drenched moose may look intimidating, but it’s not that hard because it does not have much in terms of attack moves. The club is an efficient weapon against this legendary animal.

This one won’t be on your map until you get pretty close to its location, and note that Steinnbjorn is a power level 400 beast, so be careful. To defeat this polar bear made out of ice, target its weak points specifically to lower its stun bar and reel in the heavy attacks. 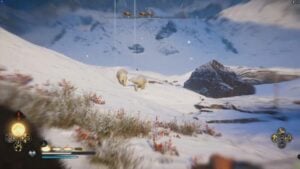 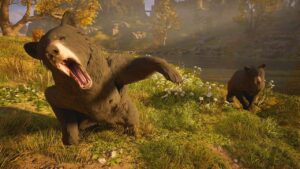